From Waste Heat to Essential Electricity 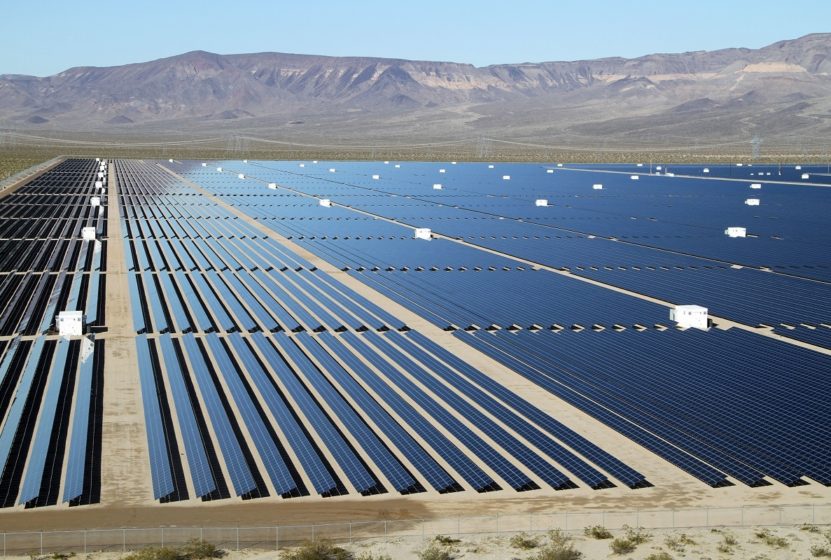 Arrays of solar panels in the Nevada desert don’t just block the Sun’s rays from reaching the ground; they also intercept rainwater possibly impacting plant and animal habitats, according to NEXUS researcher Dr. Markus Berli of the Desert Research Institute.
“There are no doubts if you are going to build solar infrastructure, as in solar panels, you are going to change the way that water reaches the ground,” says Berli, who is also the NEXUS co-lead for the environmental component of the project.
Instead of raindrops falling on the soil in a uniform, or homogenous pattern, when solar panels are in place, the droplets land on the panels and the earth immediately below the panels remains dry. But once the rain has fallen, it runs down the panel slopes and drains into the ground in concentrated drip lines. In addition, rain reaches the surface via the cracks between panels.
“So in other words if you put these panels out there you will change the homogenous rainfall distribution and you come up with a very zig-zag pattern of rainfall distribution that changes the way that water infiltrates into the soil,” Berli says.
Scientists know that the panels modify how the rainwater enters the soil but they don’t yet know the resultant overall change in soil moisture, a factor that can determine how suitable an environment the area is for native plants and animals. Consequently, to investigate, Berli and NEXUS graduate student Yuan Luo, have begun a series of numerical experiments designed to shed light on the puzzle. “The overarching goal was to better understand how solar arrays impact the rainwater infiltration into the soil,” Berli says.

Conceptual model of water infiltration into soil under a solar array. –M. Berli

Starting from the hypothesis that solar arrays increase infiltration of rainwater into the soil along specific drip lines, the team designed a soil physical computer model to test whether this was, in fact, the case. Their goal was to investigate the soil moisture distribution, after rainfall both when solar arrays were absent, and when they were present.
The team have calibrated the model using data from the SEPHAS lysimeter, a large soil containing stainless steel drum that also accommodates about 150 instruments. Using this setup the scientists were able to measure variables such as water content and temperature in response to rainfall events, and calibrate their model accordingly.
“It proved the perfect test case for us,” Berli says. “It meant that we were able to take our first version of the model and measure it against actual data.”
Using this model the scientists simulated the concentrated infiltration by solar panels and their impact on the hydrology of arid soil at the Eldorado Valley solar installation near Boulder City, Nevada where the annual precipitation is a sparse 141 millimeters. The model was designed to simulate moisture content after storm events at different depths in the absence and presence of solar panels.

From Loss to Storage

When the scientists applied this model, they found that when no solar panels were in place, 20 millimeters of rain falling in 2 hours would infiltrate 20 centimeters into the soil. “The one million dollar question is what happens if you have solar panels on top,” Berli says.
When the team investigated this question, they found that at the end of a storm, they began to see patchiness across the ground’s surface, with small areas of water infiltrating into the soil. Then, 24 hours after the storm, the scientists could observe different levels of infiltration in the panel area.
At the drip line, the area where the raindrops slide down the panel and fed into the soil, the infiltration could reach depths of 50 centimeters. When water infiltrates as deep as 50 centimeters it is unlikely that it will be lost back into the atmosphere through evaporation. Instead it accumulates and is stored in the soil.
“The difference between 20 and 50 centimeters is huge when it comes to water storage and water loss,” Berli says. “What this simple simulation indicates is that if you have these drip lines and you have these areas of concentrated infiltration you will probably have a net gain in soil moisture over time.”
The team plans on expanding their model to investigate the variation in infiltration due to different storm events and in a variety of soil and atmospheric conditions. “Our vision in the long run is to provide a tool that allows us to assess the impact of these solar arrays on the soil hydrology,” Berli says.
The scientists hope that in the future the model can be used to look at questions such as the amount of rainfall that can infiltrate before runoff occurs causing soil erosion, Berli says.  Such predictions will gauge how arrays of solar panels can potentially change the ecosystems inside and around solar installations.
Just recently, First Solar, a company that develops and operates PV power plants, has expressed an interest in how the ecosystem with a solar facility may change due to the impact of the panels. In particular the company wants to know whether the installations could act as “sanctuaries” for plants and animals.
“To be considered green, solar energy should be generated with minimal impact on the environment,” Berli says. “This research addresses the impact of utility-scale solar energy generation on the local hydrology of a water-limited, desert environment.

Connecting Vital Research With the Community

Markus Berli’s research focuses on assessing the impacts of solar energy generation on the environment and, in addition, Berli is also a Co-Lead of the NEXUS External Engagement component. Along with Co-Lead Dr. Mary Cablk, also a NEXUS scientist at the Desert Research Institute, Berli has organized panels with representatives from federal agencies and the industry side of solar development. The outcome of one such panel in 2015 resulted in a collaboration between Valley Electric Association, Inc. (VEA) and the US Fish and Wildlife Service with a view to minimizing the environmental footprint of VEA’s community solar project.

“This is an example of the importance of connecting people,” says Cablk. “In today’s day and age of technology, sound bites, and character limitations all it took was conversation between two people to come to the realization that there was a shared vision and together they might innovate.”