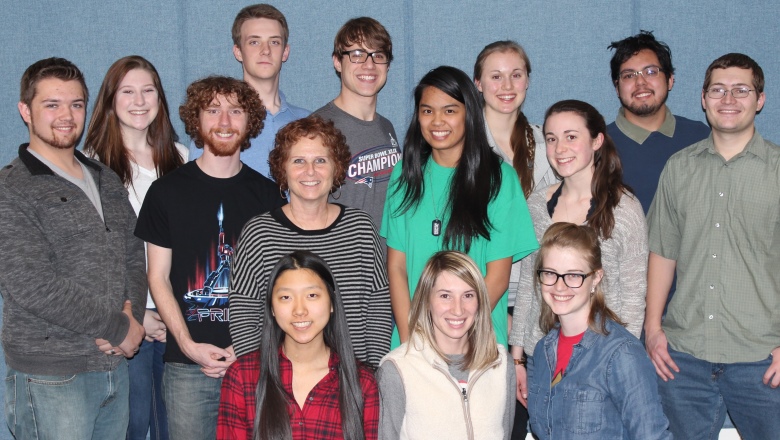 It’s been a little over a year since Giselle Serate and Juliana Anderson of Reno’s Davidson Academy made a video explaining 3-D printed robotic hands, but since then the high school students have flocked to make these educational resources accessible for all their peers.
“We were only originally supposed to be making these videos with three Davidson Academy students each year, “ says NEXUS researcher Nancy LaTourrette, a lecturer in computer science and engineering at the University of Nevada, Reno (UNR). “But we’re working with 11 students now and even more kids are coming to me and saying ‘Can you fit me in on this project?’”
LaTourrette initiated the Science, Technology, Engineering and Math Bilingual Online Peer Sessions (STEMBOPS) program in 2014, as part of the NEXUS workforce development mission, which supports growth in STEM fields. The program pairs pre-college, undergraduate and graduate students with NEXUS researchers, who act as mentors introducing the students to science and engineering in the lab. The students make videos about their experiences and the concepts they learn, which can then be viewed by their classroom peers.
“It is important to have students introduced to STEM research at a young age and then have them act as peers to inspire the greater community,” LaTourrette says. “Instead of having someone older pontificating about their research, we have these very young students that, in a fun way, can go ahead and explain, ‘This is what I am doing, and what I can do, you can do also.’”

The STEMBOPS students don’t just create videos, they write white papers to show that they have understood the technical aspects of the science. And then, as if these accomplishments weren’t challenging enough, they create the videos in Spanish, as well as English. The ultimate goal is that the videos will be taken to schools and can also be used to introduce the greater community to science and technology concepts.
LaTourrette hopes the bilingual versions of the videos will help involve Hispanic communities in securing a future STEM workforce. “I like to think of it as ‘K through Gray’- that these videos can reach an audience from kindergarten all the way through the community-at-large,” LaTourrette says.
By involving the community, LaTourrette hopes that more parents will spur their children to go into STEM fields. Likewise, by encouraging female students into the STEMBOPS program, LaTourrette hopes to boost the numbers of women interested in science and engineering.
But LaTourette would like the project’s influence to extend beyond educating tomorrow’s future scientists and engineers. She hopes the peer-to-peer model and video format will make it easy to introduce scientific concepts to students who won’t be going into STEM fields.
“If we think diversity is good then that actually means diversity not just in terms of women or people in underrepresented groups, it should be diversity in terms of diversity of thought,” LaTourrette says. “So people with a background in liberal arts, whether communications, history or other disciplines, should be integrated into STEM topics because their point of view is going to make research and research products better.”

Breaking Down the Barriers

In the meantime, however, one important goal of the project is to break down the intimidation factor of science and engineering for young students. To this end, one fifteen-year-old STEMBOPS student is soon to start on a day-by-day video blog of her introduction to the lab, documenting her first few hours, or days, of confusion and uncertainty. She’ll then take viewers through the gradual process of gaining understanding, clarity and confidence. LaTourrette hopes the video series will show school students that all scientists and engineers start in the same place and that a STEM career, with the right training, is attainable.

“I’d like science and engineering not to be seen as something apart,” LaTourrette said. “You don’t have to have a certain personality type or left brain aptitude and you don’t have to know all the facts intrinsically to be a scientist or engineer.”

Now that the STEMBOPS students have created a significant body of work, the goal is to get the videos out into the community where they can start doing some good, LaTourrette says. A multitude of options exist for doing this: teachers could incorporate them into the school science curriculum or summer science camp programs and campus Hispanic student organizations or foreign language students could also view the videos.

“There is a myriad of ways that we can use this material,” LaTourette says. “I can envision the scope of this work ever expanding with new interested students, additional faculty members that are willing to be mentors, and a multitude of venues that can air the videos.”

Trained scientists and technicians form the backbone of research and development at NEXUS, but for solar energy to be sustainable in future years requires a steady supply of young researchers entering the Science, Technology, Engineering and Math (STEM) disciplines.

To this end, the NEXUS goal for Workforce Development and Education is to develop a sustainable STEM workforce by creating a pipeline of STEM-trained students, educators, and workers. The project is also committed to increasing public understanding of solar energy, water and the environment.

“Through projects such as our STEMBOPs program, NEXUS will expose K-12 students and the Hispanic community to real science research,” says Gayle Dana, Project Director of NEXUS. “These initiatives are really going to help close the racial and gender disparities in the STEM fields in Nevada.”

NEXUS Notes is a monthly publication of the Solar Nexus Project, which is a five-year research project funded by the National Science Foundation (grant #IIA-1301726) focusing on the nexus (or linkage between) solar energy generation and Nevada’s limited water resources and fragile environment.