Nevada EPSCoR, through the NSF EPSCoR Solar Energy-Water-Environment Nexus in Nevada project (IIA-1301726), hosted an intensive two-day proposal writing retreat January 9-11, 2018 in Incline Village, Nevada. The retreat was facilitated by The Grantsmanship Center and provided guided proposal writing sessions for eleven faculty from the Nevada System of Higher Education. Faculty were required to work on proposals that would be submitted during Spring 2018 to state or federal funding agencies. The retreat provided them a setting where they could focus solely on writing, editing and networking with the intent to grow and sustain research. Follow up will be done Fall 2018 to see if any of the proposals were funded. (Photo credit: Michele Casella)

The 2018 Nevada EPSCoR Early Career Faculty Retreat is an innovative 2.5-day residential workshop designed to enhance the productivity and possibilities of early-career faculty from the Nevada System of Higher Education (NSHE). Participants in this workshop will participate in intensive research proposal writing.

This very interactive training will introduce researchers to core knowledge and skills needed to develop research grant proposals for funding sources including NSF and NIH, as well as other federal government agencies and private and public foundations. Participants will engage in numerous exercises and actually develop proposals during class.

All participants will have identified a specific project and potential funding source(s) prior to the training and will be encouraged to bring proposals already in progress, or proposals that have been declined, to work on during the class.

Please submit the online application by November 17, 2017 to be considered for this opportunity.

This year’s retreat will be held January 9-11, 2018 at the Hyatt Regency, 111 Country Club Drive, Incline Village, Lake Tahoe, Nevada.  As this is a residential program, lodging will be provided at the Hyatt Regency.  Meals will also be provided. Reimbursement for airfare and ground travel will be provided to all participants. See travel page for more details.  Please be sure to complete the Participant Application no later than November 17, 2017 if you wish to be considered for this opportunity.  Your participation in this program will be confirmed by November 21, 2017 so that you can make travel reservations through your department.

Invited participants will be reimbursed for all travel costs associated with the retreat.  Process travel through your department at your institution and after the retreat furnish a copy of your completed travel claim to mcasella@nshe.nevada.edu to reimburse your department.

In the event more than twenty faculty apply, applications will be reviewed by the Retreat Planning Committee and selections will be made based on academic and research interests and optimal group composition.  You will be notified by email if you are selected by Tuesday, November 21, 2017 in order to make your travel arrangements.

The Retreat is meant to be an intensive and immersive experience and lodging will be provided at the Hyatt Regency, 111 Country Club Drive, Incline Village, NV 89451.  Your hotel room will automatically be booked by Nevada EPSCoR when you receive notification of selection to the Retreat.

Complimentary shuttle service to and around Incline Village

North Lake Tahoe Express runs shuttle service to and from the Hyatt and Reno/Tahoe Airport for $49 per person each way. *Passenger discounted rates valid for guests traveling on the same date/shuttle time, utilizing a single reservation.  For reservations and additional information on Lake Tahoe shuttle transportation, view their website. Note: Due to road and weather conditions, it is recommended that shuttle service be utilized to avoid driving in potentially inclement conditions. 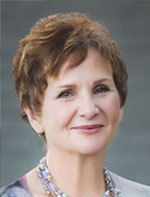 Christine Black (M.L.S., University of Michigan; B.A. English and Speech, secondary teacher’s certification) has won grant awards in major federal and foundation competitions, has served as a proposal reviewer for the U.S. Department of Education, and has taught numerous grant proposal writing classes across the country to universities and non-profit organizations.

Chris was Assistant Director for Research Development at the University of Michigan Medical School (2009-2014). In that role, she supported faculty in research proposal development, including training, writing, editing, reviewing, and developing web resources. She developed the nationally recognized and often copied R01 Boot Camp, a mentoring Academy for young faculty members who are writing their first large research grant proposals. In its first year the course yielded a 65% success rate for R01 grants awards (national average was 15%), and over $35M in grants. She also served as an interdisciplinary proposal writer and trainer for colleges throughout the University of Michigan, including many large interdisciplinary and collaborative proposals.