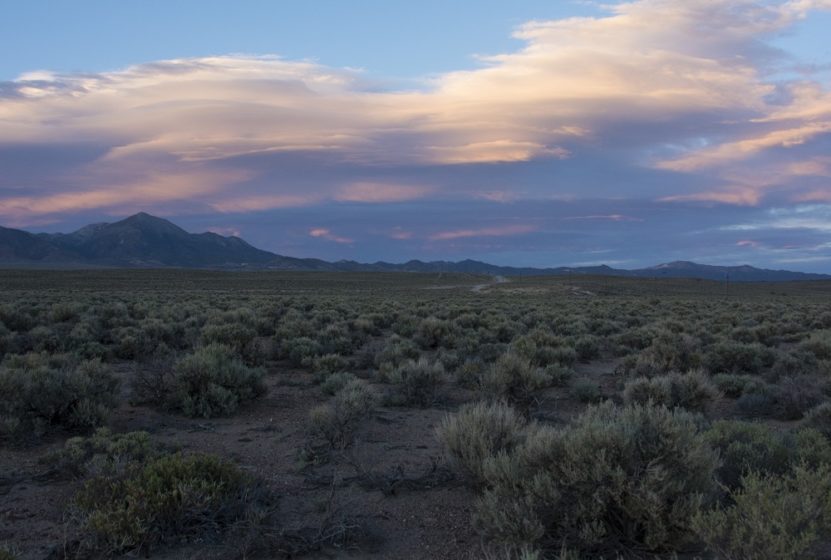 To a casual observer, desert lands may appear a barren vista of sand and soil, sparsely dotted with shrubbery and cacti but, in reality, they are lush with microscopic plants: lichens, mosses, and cyanobacteria. There isn’t an inch of soil that is without these organisms.

“These organisms are a critical component of the desert ecosystem: they stabilize soils against erosion and provide essential nutrients to plants,” says NEXUS scientist Dr. Henry Sun, a research microbiologist at the Desert Research Institute (DRI).

These coverings-known as cryptogamic crusts-while providing essential ecosystem services, are also very fragile. Both the installation of solar farms and regular maintenance activities can disturb and remove this biological layer. “Such activities can destroy the crusts and result in increased dust emission,” Sun says. “And, once destroyed, they take decades to recover.”

Consequently, Sun and his graduate student, Lynda Burns, are trying to understand the impacts that large scale solar farms will have on this component of desert ecosystems and how to develop mitigation strategies to help prevent, or remediate any damage. “The goal of our research is to know the vulnerabilities of the organisms that build these protective crusts and to use the information to guide future restoration mitigation efforts in the context of solar plant impacts,” Sun says.

Cryptogamic Crusts in the Nevada Desert Ecosystem–Photo by H. Sun

The presence of these non-flowering plants is a key indicator of a healthy desert ecosystem. As well as forming a protective soil crust, and a barrier to erosion, they also provide nutrients to plants, mediate the transfer of water and provide a base for seed germination and plant growth.  In addition, the cyanobacteria can convert the nitrogen in the atmosphere into compounds that act as fertilizers for other plants, via a process called nitrogen fixation. “So you fix nitrogen using solar energy into a form that is available to plants,” Sun says.

Recognizing the importance of these crusts, and also their vulnerabilities, scientists have been investigating how to protect them. One suggested approach has been to harvest the crusts prior to a disturbance such as the installation of a solar farm, and save them. Once the construction is complete, the researchers’ suggestion is then to use the preserved crusts to inoculate the soil and aid in restoring the new crust.

The desert can prove a harsh environment for plants with temperatures and rainfall fluctuating between extremes. Also, a process called photochemical oxidation, facilitated by the sun’s ultraviolet rays can result in reactive oxygen species that are extremely damaging to life. “For this strategy to be effective, we need to know if the organisms lose vitality during storage, how long they would survive, and how to help them survive and thrive once they’ve been re-introduced to the desert habitat,” Sun says.

The scientific community does not yet know the answers to such questions and it was a knowledge gap that the NEXUS team set out to close. They began by collecting and saving the organisms in the soil crust and set about trying to understand how long those samples could survive and whether they could be successfully reintroduced to the desert environment. “There were two questions we’re trying to answer,” Sun says. “One, whether you can store the organisms and, two, when you reintroduce them what can we do to help them re-establish?”

Putting Crusts to the Test

In the lab, the scientists started their investigations by storing lichen samples from the Mojave Desert for different periods of time. In their natural habitat the lichens in the crusts alternate between drying out and hydration. During the desiccation process, they suffer from cellular damage but once they are hydrated repair and growth is possible. In their experiments, the researchers watered the stored samples and then monitored their recovery. “Healthy specimens become active within a minute of watering and compromised lichens go through a period of repair before they become productive,” Sun says. The researchers assumed that those lichens that showed no activity after 8 hours were dead.

Using this methodology, the scientists found that lichens can be stored dry at room temperature in ambient air for up to a year without any significant decline in vitality.  One-year old samples showed similar behavior to fresh samples: once they were given water they were ready to use light energy and photosynthesize.  Three and even ten-year-old samples were weaker and it would take them between 25 and 200 minutes to restore photosynthesis after the addition of water.

The scientists then attempted to determine how ultraviolet (UV) rays would impact the lichens when they were reintroduced back into the desert. The crust lichens protect themselves from UV light by synthesizing compounds that create a screen that blocks the harsh rays.  Even when the researchers put intense UV source as close as 25 centimeters away for one week the lichens suffered only minor damage. “It was well within their ability to repair,” Sun says. “This level of ionizing radiation resistance is unparalleled in the microbial world.”

The scientists did find, however, that the lichens were vulnerable to high concentrations of ozone. Fumigation in ozone for long periods caused photochemical oxidation, killing Collema, a cyanobacterial lichen, and severely damaging Placidium, a green algal lichen. Previous studies on the stress tolerance of crust-forming organisms considered only the impacts of UV radiation and desiccation. “Our work showed that photochemical oxidation presents a more severe stress than UV and desiccation,” Sun says. “And this has implications for crust storage and restoration.”

Given the evidence that the crust lichens are primarily vulnerable to oxidation, Sun recommends that the samples be stored in a non-oxidizing gas, such as nitrogen, instead of ambient atmosphere, to minimize oxidative stress.  In the field, amending the soil with antioxidants could protect the newly restored “seed” organisms from oxidation and thereby help them grow faster.  Both the ability of the organisms to be stored and their ability to survive typical desert conditions bodes well for the future, Sun says. “The research suggests that crust restoration is feasible and should be considered by land managers and solar companies,” Sun says.

The investigations of Dr. Henry Sun and his team on biological soil crusts could have direct impacts on the restoration of desert ecosystems in the event of disturbances.  To expand the potential of this research to mitigate damage to desert environments, Sun has formed collaborations both on the U.S. mainland and in China. With Dr. Jayne Belnap of the US Geological Survey in Utah, Sun is investigating the impact of a changing climate on biological soil crusts. In collaboration with Dr. Yuanming Zhang, of the Xinjiang Ecology and Geography Institute of the Chinese Academy of Sciences, Sun is comparing the biological crusts from the hot Mojave Desert with those from the relatively cold Gurbantunggut Desert.

“One of the great offshoots of the NEXUS research is that it fosters collaborations between our Nevada faculty and other scientists within the U.S. and internationally”, says Dr. Gayle Dana, NEXUS Project Director. “This is not only mutually beneficial to the collaborators, but it also strengthens the science”.