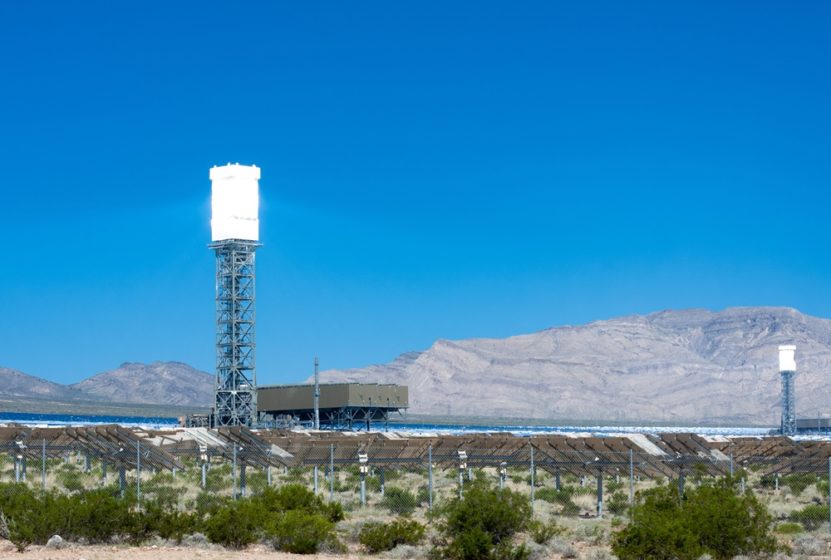 An example of a concentrating solar plant that uses dry cooling is the Ivanpah Solar Plant,
which is in the California Mohave Desert 40 miles southwest of Las Vegas, NV
–Kevin Grant/Shutterstock Photo

Concentrating solar power (CSP) plants provide a clean and sustainable form of renewable energy in the southwestern United States, but the costs on local water resources can be high.
“Water requirements for CSP can include using water in wet cooling towers as well as for washing of mirrors,” says NEXUS scientist Dr. Robert Boehm, at the University of Nevada Las Vegas (UNLV). “The first of these two evaporates water into the ambient air and this can amount to large amounts of water use.”
Most solar thermal power plants use mirrors to concentrate the sun’s energy to heat a fluid that is used to create steam, which then drives turbines that create electricity. Once the steam passes through the turbine it needs to be condensed and cooled before it can be reused to produce more electricity. Typically, solar thermal developers prefer to use “wet cooling” towers, which involve the constant replenishment of water to make up for evaporative losses.
To counteract this water requirement, researchers have developed dry cooling systems that use air instead of water to condense the steam. These systems use about 90 percent less water, as almost none is lost to evaporation. But despite this advantage, dry cooling requires more capital investment and reduces the efficiency of the power plant.
To address these challenges, NEXUS faculty Boehm and Dr. Yitung Chen with Ph.D. student Kaipo Kekaula, undergraduate student Phillip Vorce, and Research Engineer Rick Hurt at the University of Nevada Las Vegas (UNLV) are using a combination of experiments and computer modeling to improve dry cooling system performance.
“We are trying to minimize the performance penalty that exists in these kinds of systems so that, between the water savings and the performance penalty reduction, this may be more than enough to overcome the capital cost differential between wet and dry cooling,” Boehm says.

In the summer of 2015, Boehm and his team finished the construction of a full-sized apparatus to test out modifications to dry cooling systems. Incorporating slanted tubes 20 feet (6.096 meters) long (see image below), the apparatus looks like an up-ended airplane wing and in it, the air cooling tubes are nearly the same length as they would be in a fully operational unit.
“Data from experiments on this system allow us to develop computer models of dry cooling that will give us understanding of broad applications for these kinds of systems,” said Boehm.
Water flows in a pipe from the storage tank across the bottom of the apparatus (see image), and then goes into a boiler where it is made into steam. The steam then flows to the top of the apparatus where it enters the test tubes and then flows down the angled side where air blows over adjacent tubes.  The air enters the unit from the bottom of the system and then blows out through the angled side where the tubes are located. “The air provides a cooling effect on the tubes that condenses the steam.  This dry cooler is a little like the radiator in your car,” Boehm says.
In particular, the engineers are investigating how different types of cooling tubes might increase the transfer of heat from the steam to the air, allowing the whole concept to become more efficient. They are testing tubes that are smooth on both the inside and outside, externally finned tubes and tubes that have been internally treated for dropwise condensation.  Probes measure the velocity and temperature of the air that goes over the tubes in the locations where the steam is condensing. Also measured are the temperature and pressure of the steam all the way along the tubes and how much of the steam has condensed.
“The experiments we are performing allow us to understand the performance improvements that modifications to the tubes will produce,” says Boehm.

Looking to the Models

In parallel to their experimental efforts the team has developed computer models to simulate how air flows through the system and transfers heat from the tubes. Most previous modeling studies have focused solely on the heat transfer improvements in a single fluid domain, whereas Boehm and his team are investigating the more comprehensive and realistic combined effects of the steam and air.
“We are coupling analyses of the inside phenomena with outside phenomena to show the impact of the tube design.  We feel this is a key element in the work,” Boehm says. Using the models, the engineers are investigating the influence on liquid film growth and condensate accumulation on the inside of the tubes.  They are also modeling how to improve the fin design to increase the rate of condensation.
The modeling data will provide optimal estimates of variables such as local condensate film thickness, heat transfer, how the air flows and the overall energy efficiency. “The modeling data that we have developed will be used to do a variety of things to further improve an optimal system,” Boehm says.
Having finished constructing the apparatus the team is currently testing out different types of tubes for their ability to transfer heat.  They have also simulated the airflow across different types of tubes at various fan speeds. Ultimately their research has the potential to increase the efficiency of dry cooling systems in the range of 5-10%. It is research that would have wide scale applicability.
“This will work for any type of steam power plant with dry cooling: geothermal, coal, or nuclear, as well as solar,” Boehm says. “Our research can have far reaching positive impacts in the power industry.”

Minimizing the Water Use of Solar Energy

NEXUS researchers are exploring other ways to reduce solar energy production’s water footprint, in addition to developing more efficient dry cooling systems. The project’s scientists are also seeking to understand the nature of dust accumulation on photovoltaic panels and developing techniques to prevent these coatings, thereby cutting the volume of water needed for cleaning.  NEXUS researchers are also investigating whether non-drinking, lesser quality water can be used to wash solar panels and using robots to clean panels in a way that optimizes water use. “Our NEXUS research will result in both less water use and land area needed for solar development, which will reduce environmental impact and lead to better economics for the system,” says Dr. Gayle Dana, Nevada’s Project Director for the National Science Foundation EPSCoR Program.