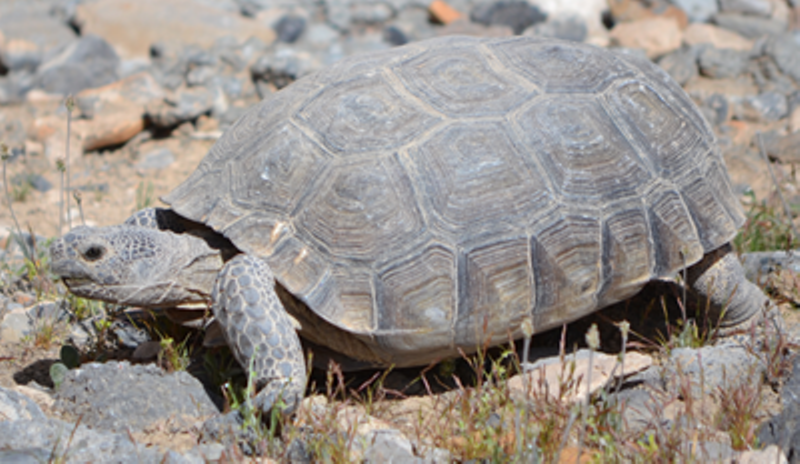 When Valley Electric Association, Inc. (VEA) recently launched a 15-megawatt solar energy generation project in the northern portion of Pahrump, Nevada, the company didn’t just consider the needs of the human population, it also accounted for the long-term natives of the region: desert tortoises.

VEA, in collaboration with Bombard Renewable Energy, is currently developing the cooperative-owned project that will supply affordable renewable energy to VEA’s member-owners in southwestern Nevada. It’s an initiative that will utilize union labor from Nevada companies and provide an estimated 200 new jobs for community members.

But the contribution to the community doesn’t stop there: The two companies are working closely with state and federal agencies to minimize the impacts to the environment before, during and after construction. In particular, the project’s Habitat Conservation Plan (HCP) focuses on minimizing and mitigating the impacts on desert tortoises and their habitat.

Before  building the new facilities, the companies constructed tortoise holding pens on nearby property—“temporary tortoise condos”— where tortoises such as “Jennifer” and “Pandora” could live until the building activities were over. They also installed a tortoise-proof temporary fence around the entire 80-acre site with tortoise-proof access points. Rather than grade the land for the panels and equipment, which would destroy the vegetation and soil cover, the engineers mowed or trimmed the vegetation, an uncommon approach for solar sites and one that reflects the innovation of the HCP. The companies educated their construction crews with a worker education program geared toward protecting the environment during the building.

The tortoises and landscape were even taken into consideration when it came to the design and placement of the panels. Panels are being spaced at 20 feet apart, rather than the standard 14 feet, to allow more sunlight to reach the ground with the intention of allowing some vegetation cover to persist. The underground wire and invertor stations are being installed along the center of the roadway to minimize ground disturbance among the rows of panels, also geared towards minimizing habitat disturbance. After the construction is complete in late summer 2016, the security fence around the site will have tortoise access points allowing the tortoises to enter and leave as they wish.

For the next three years, scientists from the US Fish and Wildlife Service (USFWS) will monitor the sites to observe the impacts of the new solar array design on the vegetation and the tortoises’ habitat. If these impacts reach a critical level, the USFWS and the companies will implement adaptive management strategies.

The scientists will also investigate whether seeding the area under the panels with Plantago will stabilize soil and provide forage for desert tortoises and whether beavertail cactus plants will supplement the existing desert tortoise forage.

After the construction, after the tortoises leave their condos, they’ll be monitored with tracking devices to see how they might use or travel around their new site.

VEA views the additional costs associated with building in protected species habitat as an investment in the community. Currently, VEA provides service to more than 45,000 people within a 6,800-square-mile service area located primarily along the California-Nevada border. The energy output from the solar project, which VEA expects to be completed in August 2016, will be available for all VEA members at a lower price than their current electric rates.

At the 2015 NEXUS annual meeting, Markus Berli and Mary Cablk, the NEXUS External Engagement CoLeads put together a stakeholder panel that included representatives from several federal agencies and the industry side of solar development. Immediately after the event, the representatives from Valley Electric Association, Inc. and the US Fish and Wildlife Service began talking and the result of these discussions was an innovative approach designed to minimize the environmental footprint of VEA’s community solar project.

Such partnerships are precisely the objective of the NEXUS External Engagement team, who focus on developing research collaborations between scientists, industries, and institutions, aimed at supporting economic development (namely solar) in Nevada. Through these collaborations NEXUS aims to widely disseminate information about innovative research in solar energy in arid regions.

“This is an example of the importance of connecting people,” says Cablk. “In today’s day and age of technology, sound bites, and character limitations all it took was conversation between two people to come to the realization that there was a shared vision and together they might innovate. While still in the early phases, the collaboration is commendable.”