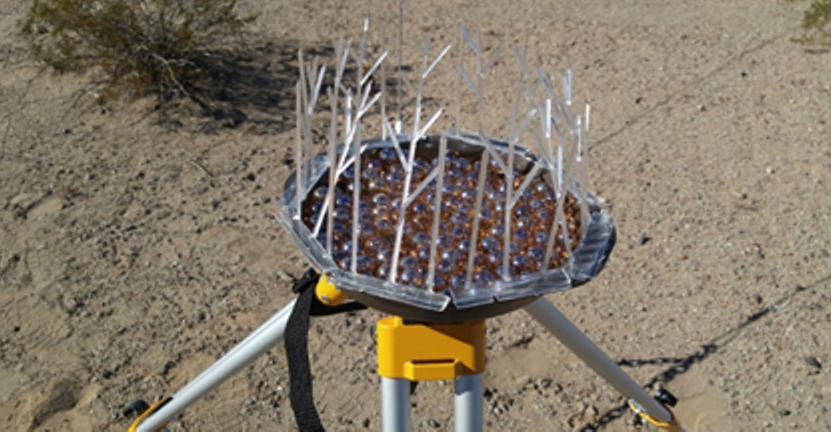 NEXUS scientists investigate the interactions between dust and solar utilities

As one of the sunniest states in the U.S., Nevada proves an ideal location to generate solar power. But the Silver State is also arid and prone to dustiness and, when it comes to solar panels, dust can be a problem.
“It effectively reduces the amount of sunlight that reaches the part of the panel that makes power,” says NEXUS scientist Vic Etyemezian, a research professor at the Desert Research Institute (DRI).”It has the potential to reduce the efficiency.”
In areas of the world such as coastal Saudi Arabia, dust can reduce power production by more than 30 percent, and can also mean added costs to replace or clean panels. To attempt to address such problems, NEXUS scientists are focusing on understanding what causes dusty conditions and how dust affects solar arrays, with the ultimate goal of mitigating its impacts.

The first step in understanding dust’s impacts is to root out its origins: Is it simply suspended soil and pollens or is it created by atmospheric interactions?
To solve this mystery NEXUS scientist Spencer Steinberg, a chemistry professor at the University of Nevada Las Vegas, and his team have visited different solar installations and painstakingly, using a paintbrush and dustpan, sometimes even a vacuum cleaner, collected dust samples from several different surfaces. The researchers then inspect the samples using Raman microscopy to see exactly what they are made of.
“In the dust we find the same kind of organic material that you find in soil, so a lot of it appears to be wind blown soil,” Steinberg says.
Desert soil has a living crust that acts to control erosion and damage to this layer can mean that winds whip up the underlying soil to create dusty conditions. Solar power installation-from the building of roads to the grading and leveling of land-can remove this crust and lead to more dust unless appropriate controls are applied.
“You have the potential of creating a dust problem when there wasn’t one before,” Etyemezian says. And it turns out that removing the top layer of soil isn’t the only way that solar facilities lead to dustier conditions.

Farmers have planted shrubs and trees around their fields for centuries to redirect wind flow and protect their crops and soils, so it stands to reason that an “outcrop” of solar panels might divert winds in some way.
“We had a pretty good idea there was going to be an interaction between the wind and solar panels,” Etyemezian says. “So the question then was to be able to measure this and have some numbers on it.”
To get this quantification, the scientists measured the wind speeds and directions outside of a utility scale solar facility near Las Vegas and also made the same measurements inside the solar installation, in between successive rows of panels. They recorded these variables at ground level at several different distances between successive panels.
The scientists found that if the winds were from the south, the panels, which were south facing, reduced the wind speed between the panels. When the winds came from the north, the panels again reduced the wind speed but the scientists observed localized areas where near-ground wind shear increased.  Such wind shear can lead to scouring of loose sediments, Etyemezian says, “So the average goes down but the localized effects go up.” When the winds had strong easterly or westerly components, the panels, which are orientated in east-west rows, straightened the winds into pure easterly or westerly directions.
The findings expose the influence of panel orientation on prevailing winds and Etyemezian hopes that this knowledge will help in the design of efficient solar installations. “If you’re not protecting that surface with the orientation of the array but you are, in fact, allowing the wind to channel through the panels, then you might have a dust problem where you didn’t have one before,” Etyemezian says. “We’re hoping that having this kind of model at least provides designers with some basic guidance on what to look for.”

Determining how dust damages solar panels is an important step in trying to mitigate its impacts. To this end NEXUS graduate student Patricio Piedra at DRI has built a model to understand how particles such as aerosols affect solar cell performance. “One of the things that this model allows us to do is understand what specific properties of particles are the ones that contribute to them having damaging effects on the ability to produce solar power,” Etyemezian says. “Is it the size of the particle or is it the chemical composition or is it the shape?”
In the short term the model will find out which particles will have the greatest effects. In the future, it will be able to predict the possible impacts of dust or atmospheric pollutants on solar panels at a particular location, prior to installation.
The model, investigations into the characteristics of dust and research on the interactions of solar installations with prevailing winds will all contribute to mitigating dust’s impacts on solar energy production. “If we can understand the interaction of these facilities with the environment and the effect of the environment on the facilities, they’ll become much more efficient,” Steinberg says.

To clean a solar panel requires more than a once over with a feather duster-only a good wipe with water does the job. Typically solar facilities use distilled water for washing the panels to avoid mineral scale deposits that might interfere with capturing the Sun’s rays. But high quality water is a scarce resource in desert regions. “Our job is to answer the following question: What types of water, other than distilled water, can be used to wash solar panels and still provide the same cleanliness?” says NEXUS scientist Jacimaria Batista, a professor in the department of civil and environmental engineering and construction at the University of Nevada Las Vegas.
Batista, who is a NEXUS Co-Principal Investigator and water lead, and her team have started a project to investigate whether treated wastewater and brackish groundwater could adequately clean solar panels.  They’ve instrumented a small solar plant located in the West Yard of the City of Las Vegas, Nevada and are testing out washing the panels with different types of water.  Post washing, the scientists determine the cleanliness of the panels using a goniometer, an instrument that indicates how clean the panel is and the presence or absence of mineral film deposits.
“If successful, this research could point the way to using water of lesser quality for solar energy needs and conserving fresh water,” Batista says.
May 2016

NEXUS Notes is a monthly publication of the Solar Nexus Project, which is a five-year research project funded by the National Science Foundation (grant #IIA-1301726) focusing on the nexus of (or linkage between) solar energy generation and Nevada’s limited water resources and fragile environment.