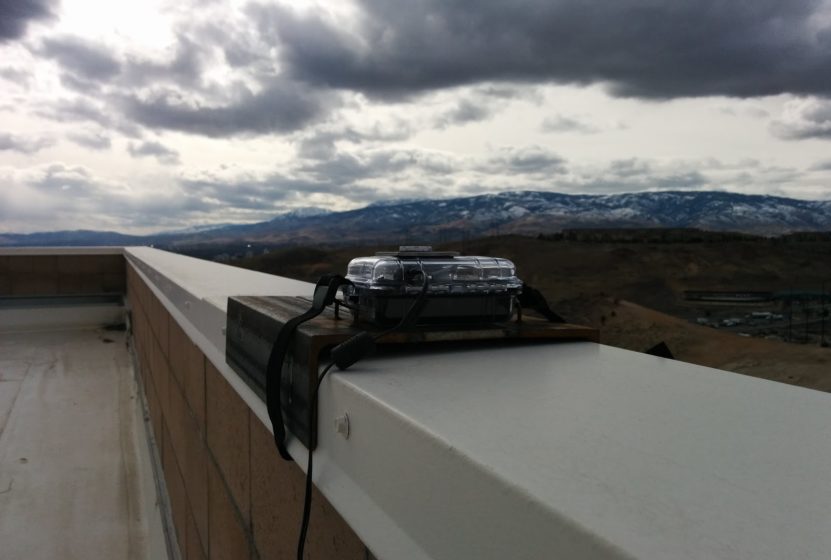 With more than 300 days of sunshine every year, the odds that the weather in Las Vegas will be good to you are in your favor, according to the city’s tourist board.
Such predictable sunshine reigns across the entire state making it the ideal locale for both rooftop photovoltaic (PV) panels or large scale solar energy utilities. But, even in Nevada, cloudy days can happen.
“Northern Nevada is quite a bit cloudier than in southern Nevada but even in southern Nevada, especially in the summertime in the afternoon, clouds are not that uncommon,” says NEXUS scientist Eric Wilcox, associate professor of climatology at the Desert Research Institute (DRI).
Such clouds can cause problems for consistent solar energy generation. When a cloud gets between the sun and a solar array, it can create significant changes in the amount of power generated.
“If you just have one solar array in a big city it’s not really that important,” Wilcox says. “But as you get more penetration of solar into the marketplace, particularly in these sunny, southwestern places, at some point those voltage variations from the variability of cloudiness start to actually impact the reliability and the quality of the electricity on the grid.”
To compensate for the power fluctuations, conventional forms of generation-fossil fuels, natural gas and coal-must be kept in reserve. To create a more clean and sustainable solution, however, Wilcox and his team are trying to anticipate when these fluctuations might happen, so that other backup steps can be taken.
“We’re investigating if forecasting can be used with the smart grid technology to maximize the use of solar power over fossil fuel reserves,” Wilcox says. “So really we are asking: Can we game the odds of sunshine with a forecast?”

Peering into the Crystal Ball of Clouds

On a typical summer day in Las Vegas, the atmosphere is so dry that if a scientist could condense the entirety of the moisture in the air into a glass, the water would only be 1 centimeter deep, Wilcox says. But every two weeks or so, the North American monsoon effect carries moisture from the Gulf of California into southern Nevada. “When one of these episodic events occurs you get half a day of clouds,” Wilcox says.
Numerical weather prediction models can determine when one of these weather events will arrive up to five days in advance, but these same models can’t predict when a particular cloud will move in between a solar panel array and the sun. Typically during these times, the amount of sunlight reaching a panel can vary dramatically over very short time scales.
“You can see an increase and then a subsequent decrease of four or five times magnitude in terms of Watts per meter squared in just a matter of 15 minutes,” Wilcox says. “So it is these kinds of short time scale surges that create large fluctuations in voltage and power that we’d like to anticipate.”
To do this, Wilcox and his graduate student at the University of Nevada Reno, Marco Giordano, have built a prototype sky-imaging camera that takes images of the sky in the vicinity of solar PV arrays.  The weatherproof camera takes the pictures and then analyzes them to distinguish cloudy pixels from clear sky pixels. Using this information, a computer algorithm can then track the movement of a cloud and predict when it will shade the PV array.
The idea to use sky imaging is not a new one, Wilcox says. But current commercial cameras cost about $15,000.  “Our goal was to see if we could do this with the components not exceeding about $100,” Wilcox says. “This is what we have done with cameras jury rigged in the field and what we have now done with a more operational tool.”
The low cost of the tool opens up a wealth of possible applications for its use, Wilcox says. The scientists could deploy the instruments at distributed solar PV sites in the city of Las Vegas and develop a shared database of sky images. This database could be used to refine the algorithms that predict the cloud movements.

Left image shows the sun is visible. The image on the right shows the sky two minutes later when the sun is partially obscured. This is exactly the type of scenario that the researchers are trying to anticipate.
–Images from camera mounted on the top of the UNR physics building by Pat Arnott

Toward a More Reliable Source of Solar Energy

The team’s ultimate goal is to investigate how the forecasting tools can be integrated into the management of the electrical grid that distributes power from solar panels to consumers. “That’s where the collaborative aspect of the NEXUS project comes into play because I’m not an engineer, but there are a lot of electrical engineers on this project,” Wilcox says. “So by having access to those aspects of this project, I can start to ask the broader question of: If you have this information, how could it be used to provide a more reliable source of solar electricity?”
The scientists’ first steps in this direction involve integrating the forecasting technology into the newly developed University of Nevada Las Vegas (UNLV) microgrid. NEXUS scientist Dr. Yahia Baghzouz at UNLV is currently testing the technology for its ability to smooth out variations in solar power output to the electricity grid.
“It is exactly these variations that we hope to anticipate by developing forecasting tools,” Wilcox says. “So the microgrid is the natural place to see how we can combine forecasting technology with other smart grid technology with the goal of increasing the reliability of solar power on the electric grid.”

An overcast day with thick cloud cover obscuring the sun

Toward Efficient and Sustainable Solar Energy

The core mission of the NEXUS project is to maximize solar energy efficiency while minimizing this sustainable energy’s impacts on the environment and water resources.  With this objective in mind, several NEXUS teams are currently focused on investigating different techniques to increase solar energy efficiency from developing durable solar absorbing coatings to anticipating and removing dust coatings on solar panels. Researchers working on these technologies don’t just focus their attention on increasing efficiency, they are especially concerned about the water and environmental consequences of their research.
“Our faculty are approaching the solar nexus issues from all angles,” says Dr. Gayle Dana, Nevada’s Project Director for the National Science Foundation EPSCoR Program. “Using such an innovative interdisciplinary approach will result in great benefits to solar energy, the environment and society.”