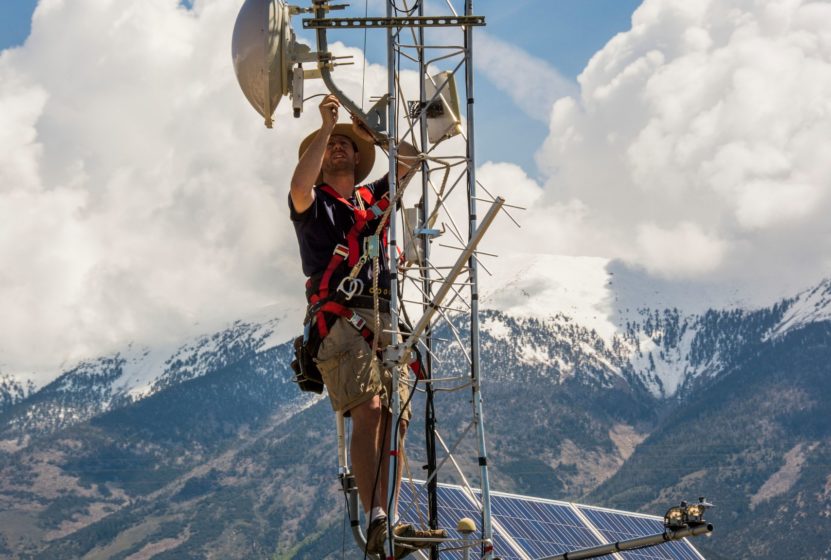 In the arid desert near Boulder City, Nevada, scores of instruments collect a steady stream of climate and environmental data from around, and within, the solar panel arrays that stretch across the landscape. The gathered information will help optimize solar energy efficiency and also minimize future environmental impacts, but first this data needs to be transmitted, processed, understood and interpreted.

Enter the NEXUS Cyberinfrastructure (CI) initiative, which focuses on providing the critical information framework for conducting research at the nexus of solar energy, water and the environment. CI researchers build the tools for data management and data processing to be used by both scientists and educators.
“Data is our main concern: from acquisition to storage to presentation to processing,” says NEXUS scientist Sergiu Dascalu, a professor in the Department of Computer Science and Engineering at the University of Nevada, Reno (UNR). “Cyberinfrastructure’s goal is to support, facilitate, and accelerate high quality research and education.”
In addition to providing a foundation for the NEXUS project, CI will increase Nevada’s cyber capabilities for interdisciplinary research and education by developing advanced tools for data visualization, mining, and security.
“Our CI project is important because it develops capacities that we didn’t have in the past before in Nevada,” Dascalu says.

The cyberinfrastructure data transport network allows field scientists to make connections between equipment, database systems, the internet, and each other.
–Scotty Strachan Photo

After scientists collect vast quantities of data in the field, they need to process this information in the labs in Las Vegas and Nevada. Both the field sites and the labs create a flow of information into CI’s “end-to-end” system.
“At one end we have research sites and research labs and in the middle we have our network,” Dascalu says. The network then transmits the data to the Nevada Research Data Center (NRDC), which is based in UNR with an associate computing facility at the University of Nevada Las Vegas. “About every five minutes we have 900 new measurements and data is flowing into the NRDC as we speak,” he says. These network capabilities are enhanced by the statewide digital microwave backbone infrastructure managed by the Nevada Seismological Laboratory (NSL), a NEXUS CI partner.
The NRDC is dedicated to supporting science research in the Nevada System of Higher Education by offering a data acquisition, data management and research sharing platform.  Currently it serves up data from a network of sites dedicated to the monitoring and recording of climate conditions in some of the most remote places in Nevada. These sites have sensors that record air temperature, humidity, precipitation, soil moisture and a host of other variables.
In early 2016, the NRDC joined the Data Observation Network for Earth (DataONE), a National Science Foundation funded cyberinfrastructure program. DataONE curates data, provides data management and analysis tools for the greater scientific community.
“DataONE Member Node status benefits NRDC by reaching a wider audience, leveraging existing CI, receiving additional recognition, maintaining high availability, and enhancing collaboration opportunities,” says Gayle Dana, Project Director of NEXUS.
The NRDC supports the unique needs of the scientific community that studies the nexus of solar energy, water and the environment as well as other scientists engaged in interdisciplinary research. In creating the infrastructure for such research, Dascalu says he talks to scientists researching solar energy production, water issues, the environment as well as engineers involved in developing networks, databases or computer software.
“Interdisciplinary work always raises interesting challenges. It involves sharing information between groups that wouldn’t share information normally because they couldn’t have the framework for it,” Dascalu says. “It is very diverse, interesting and challenging but it is an opportunity to share what everybody involved needs to learn and improve the way we do science.”

One of the goals of the NRDC is also to provide tools for educators to communicate the many aspects of climate science and, in addition, the CI team is committed to providing opportunities for both undergraduate and graduate students. 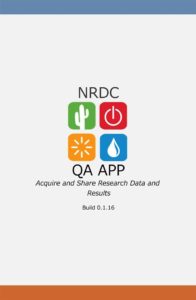 Students get to work on real problems and directly contribute to the CI mission. For undergraduate students Hannah Munoz, Samantha Grant, Matthew Salivar, and Royal Stewart at UNR that meant designing an app for the Android mobile platform for gathering climate data in the field. Instead of laboriously recording the data in a logbook and then having to transfer a day’s information onto a networked computer, now field technicians can simply use the app to gather the data and this quality assurance app streams the data to the NRDC, where it will be stored.“Our objective is to provide the field technicians with an effective method of creating documentation for their work and also provide them with a positive and satisfying experience when servicing these stations,” Munoz says.
Currently, Dascalu sees the CI team as two thirds the way through the objectives they outlined in the original NEXUS project proposal. In the last third of the project they’ll expand their capabilities for data visualization and simulation and consolidate the strong foundation they have already laid down. Another important goal for the CI team is to increase their integration with a variety of interdisciplinary NEXUS research activities.
“Our goal is to sustain the project beyond 2018 and have it evolve through the years for the benefits of scientists, students, educators and the public,” Dascalu says.

Contributing to a Unified National Cyberinfrastructure

In May 2016, the National Science Foundation (NSF) unveiled its research agenda for the next few decades in the form of nine big ideas. Prominent in the NSF list was “Harnessing Data for the 21st Century Science and Engineering.” The core mission of this big idea is to develop a cohesive, federated national scale approach to research data infrastructure-a mission encapsulated in the NSF Future Directions for Advanced Computing Infrastructure to Support U.S. Science and Engineering report for 2017-2020.

In this report, the NSF emphasizes its commitment to building a comprehensive, integrated, sustainable, and secure cyberinfrastructure (CI) that will accelerate research and education in science and engineering. The NSF believes that such a CI will create new capabilities for collaborations at multiple scales, from individuals to communities, to address far more complex problems of science and society than previously possible.

The NEXUS CI efforts are modeled on NSF objectives and guidelines and, in doing so, CI provides a solid foundation for data collection, data analysis and data communication within the state of Nevada. A primary objective of NEXUS CI is to create a new archetype for CI research and development that could potentially serve as a model for national CI efforts. When the Nevada Research Data Center became the newest Member Node to join NSF’s DataONE, it made such expertise available to other scientists and educators and it took a giant step forward in contributing to the futuristic NSF vision.

“We are proud that the Nevada Research Data Center is at the cutting edge of cyberinfrastructure development and helping build a solid infrastructure for the nation,” says Dr. Gayle Dana, NEXUS Project Director. “NEXUS CI is forging ahead on NSF’s objectives and it is proving to be a win-win for both Nevada and NSF.”