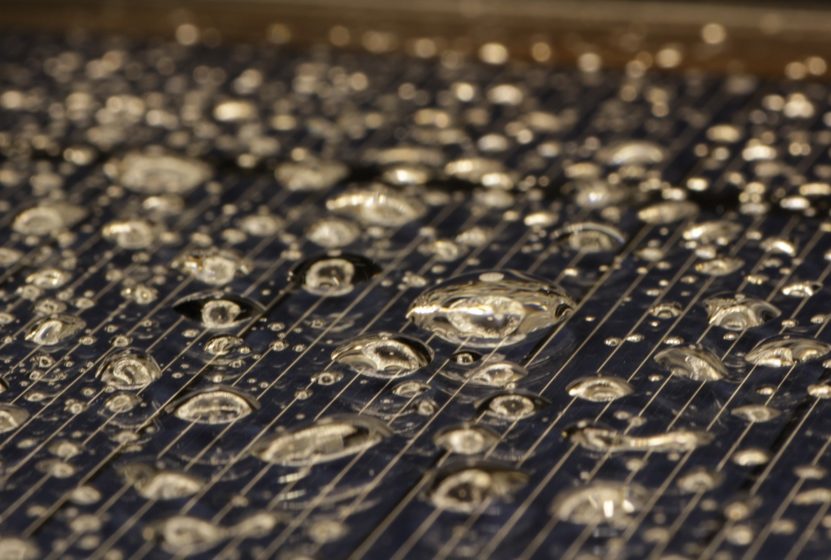 In Nevada, the sun’s rays provide an abundant and clean form of energy but harnessing that potential can come at a cost. Water is needed to clean solar panels and mirrors as well as to cool solar thermal power plants, but water in the desert is a scarce resource.

Consequently, to ensure that solar energy is a sustainable source of energy in arid desert environments, NEXUS scientists are investigating various ways to minimize water use while maximizing solar efficiency.

“The conditions we face in Nevada are like those in many locations in the desert southwest that are desirable for converting solar energy. While it has a great deal of sunshine, it has limited water and a very sensitive environment. This program has been designed to allow us to learn to use this resource wisely with these constraints,” says NEXUS scientist Dr. Robert Boehm, at the University of Nevada Las Vegas (UNLV).

While Nevada proves an ideal location to generate solar power due to its many sunny days, as a desert environment it is prone to dustiness. And, when dust accumulates on solar panels it can reduce their efficiency at converting the sun’s rays into power. To address this challenge, NEXUS researchers Spencer Steinberg at UNLV and Vic Etyemezian at the Desert Research Institute have focused on understanding how dust affects solar arrays and how these impacts can be mitigated.

Their research started by Steinberg collecting dust samples from different solar installations and finding that a lot of the material on panels appears to be wind blown soil. Deeper investigations by Etyemezian determined that the orientation of the panels with respect to the prevailing wind direction can impact how much dust gets deposited on the panels. “By bounding the magnitude of energy or efficiency losses that can arise from the deposition of atmospheric dust and other particles, our work goes to improve efficiency in water usage for cleaning operations of solar photovoltaic (PV) panels,” Etyemezian says. “Additionally, through improved understanding of the impacts of setting and specifically wind conditions on the potential for dust to interact with solar PV installations, our work has provided simple guidelines for siting that can eliminate or reduce the need for water based cleaning.”

Solar facilities typically remove dust by spraying the panels with water, which is not cost effective and uses a valuable resource in the desert. Consequently NEXUS scientist Dr. Kwang Kim of UNLV has focused his attention on modifying the surface of solar panels so that dust doesn’t adhere to them. These modified surfaces can also mean that the dust particles can be removed more easily. Sometimes a natural breeze can be sufficient to remove the particles. Kim designed a testing apparatus to allow different panel coatings to be evaluated for their effectiveness in preventing dust accumulation in different conditions. “It is exciting to be able to work towards more environmentally friendly solutions in the field of solar and renewable energy,” Kim says.

NEXUS scientist Dr. Biswajit Das and his UNLV team have also explored using nanotechnology, not water, to clean solar panels. Their research has involved coating the solar panels with arrays of transparent but electrically conducting tiny particles, known as nanoparticles. These particles provide an electrical field that can modify the electrical properties of the dust particles. Once these dust particles are charged, an electrical field can be used to attract them and sweep them away from the panels without the use of water. The team is currently collaborating with other NEXUS researchers to develop a low cost technology for the development of transparent conducting nanoparticles. “The technology can significantly reduce water usage in solar energy generation,” Das says. “And it is expected to have much lower environmental impacts due to less human and robotic intervention.”

Electric-field induced ordering of high quality nanoparticles, a new technology developed in this project with potential for advanced nanoparticle devices. Photo by B. Das.

As well as using water for washing panels and mirrors, concentrating solar power (CSP) plants require cooling, which has been done historically using water. Most CSP, also known as solar thermal power, plants use mirrors to concentrate the sun’s energy to heat a fluid that is used to create steam, which then drives turbines that create electricity. Once the steam passes through the turbine it needs to be condensed and cooled before it can be reused to produce more electricity. Typically, solar thermal developers prefer to use “wet cooling” towers, which involve the constant replenishment of water to make up for evaporative losses.

To counteract this water requirement, researchers are working to improve dry cooling systems that use air instead of water to condense the steam. These systems use about 90 percent less water, as almost none is lost to evaporation. But despite this advantage, dry cooling requires more capital investment and reduces the efficiency of the power plant.

To address these challenges, NEXUS UNLV faculty Dr. Yitung Chen and Dr. Boehm are using a combination of experiments and numerical modeling to improve dry cooling system performance. In the summer of 2015, Boehm and his team finished the construction of a full-sized apparatus to test out modifications to dry cooling systems, while Chen and his team have developed computer models to find improved solutions more quickly. Ultimately their research has the potential to increase the efficiency of dry cooling systems in the range of 5-10%. “This will work for any type of steam power plant with dry cooling: geothermal, coal, or nuclear, as well as solar,” Boehm says. “Our research can have far reaching positive impacts in the power industry.”

Reducing the washing of panels and dry cooling systems are not the only ways to minimize water use. By boosting the efficiency of solar energy, more power can be produced for the same amount of water used.

NEXUS scientist Dr. Jaeyun Moon and her UNLV team’s goal has been to create materials that will increase the ability to absorb the sun’s rays while minimizing heat loss. To this end, Dr. Moon has investigated the use of special types of nanomaterials that are assembled at elevated temperature and vapor pressures. Their work has focused on a special class of materials – mixed inorganic oxides – and how to modify the surfaces of the absorber to increase light trapping. These mixed inorganic oxides prove stable at high temperatures, a feature that allows the CSP system to function more efficiently. The modified coatings showed “enhanced optical performance and high temperature stability,” Moon says. “If the CSP plants can generate electricity more efficiently, it will allow us to use less water and land at the plants to satisfy electricity demand.”

In another effort to boost efficiency NEXUS scientist Boehm and his UNLV team have also developed the first ever solar-powered supercritical CO2 engine system. In one of these engines, a solar dish with a receiver and an engine tracks the sun. The sun’s energy heats carbon dioxide which then turns a turbine to produce power. It’s a technology that had not yet been evaluated on solar power. “The pioneering nature of this project makes it farther from short term applications, but its promise of high thermal efficiency indicates that it might be a turning point in the design of solar power systems,” Boehm says.

In addition to the many achievements of NEXUS scientists in exploring technologies that could maximize solar efficiency while minimizing solar’s water use, this sector of the NEXUS project has allowed opportunities for 10 graduate students, all of whom will graduate by the end of the project.

These graduate students have fostered collaborations both within and outside of the Nevada System of Higher Education, which will serve to strengthen the research into sustainable solar in the decades to come. Two of these students, Danielle Nobles-Lookingbill and Kaipo Kekaula have established international collaborations with scientists at the Xi’an Jiaotong University (XJTU) in China. In 2017, both Nobles-Lookingbill and Kekaula traveled to XJTU University to conduct research with two scientific groups. Nobles-Lookingbill was able to connect with and discuss the design of an innovative technology, known as a supercritical carbon dioxide Brayton power cycle, which will ultimately lead to greater efficiency in concentrated solar power systems. Kekaula was able to learn about a critical computational technique that was directly applicable to his research, which focuses on the development of dry cooling systems that use air instead of water to condense steam for water reuse in solar thermal plants.

Both Nobles-Lookingbill and Kekaula cite the value of the experience in furthering their own research goals and state that they hope to continue collaborations with their Chinese colleagues throughout their careers.

“These collaborations have given these students international knowledge at the frontiers of research”, says Dr. Gayle Dana, NEXUS Project Director. “Not only will the collaborations further the student’s careers, they will also sustain and strengthen the nation’s science, technology, engineering, and mathematics (STEM) capabilities.”