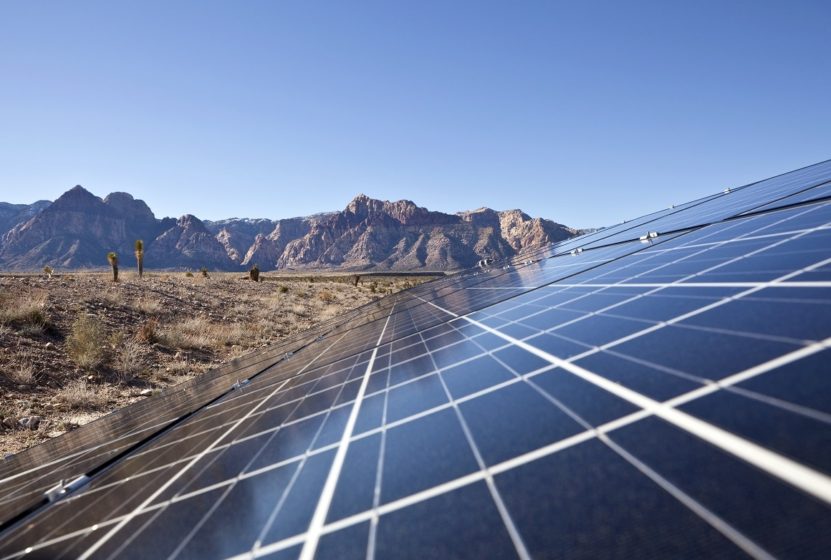 Solar energy is a clean source of energy that neither emits greenhouse gases nor requires drilling deep into the ground or the ocean. But both the construction and the deployment of large-scale solar power installations do have some impact on the environment, especially in the desert where they are most typically located.

Moving forward, to mitigate the environmental impacts of solar facilities it is important to understand how they affect the local land, hydrology and microclimate. Consequently, for the last five years NEXUS scientists have been investigating the response of desert ecosystems to solar power from every possible angle.

Eyeing From The Sky

NEXUS scientist Dr. Haroon Stephen at UNLV has taken a bird’s eye perspective when it comes to looking at the impacts utility scale solar energy. He has used remote sensing to look at the land surface prior to any building, during construction and in the years after installation.Stephen’s research has revealed that the surface temperature outside the boundary of the solar plant does not change, whereas it significantly decreases inside the plant after the construction. The research has also shown that photovoltaic (PV) panel installation increases runoff volume during a storm and that runoff peak flow can significantly alter after panel installation.

To perform the investigations, Stephen’s research involved the development of a hydrologic analysis procedure to study the effect of solar panel geometrical characteristics on small-scale surface runoff as well as large-scale stream flow. It’s an approach that can be adopted by solar farm developers to better design the water drainage or water storage features at the facility. “It provides an insight into the impacts on land cover, surface temperature, and runoff, which must be considered to achieve sustainable energy resources,” Stephen says.

Devitt and his UNLV team also looked at the above ground impacts of large-scale solar development on desert ecosystems. These scientists installed 10-meter meteorological towers around Sempra’s Copper Mountain 2 (CM2) solar facility in Eldorado Valley, Nevada and collected meteorological data, plant data and soil data for more than three years. Their research revealed that warm air moved from the facility into the adjacent creosote bursage plant community, detected primarily during the early morning hours. The scientists found that CM2 had also impacted the surface hydrology, which has affected plants growing as far as 500 meters down gradient from the facility.

“Our data suggests that the responses will be subtle and that it may take many years for the responses to be translated into shifts at the ecosystem level,” Devitt says. “We also believe our research provides greater insight into how large scale solar facilities should be designed.”

NEXUS researcher Dr. Scott Abella and his UNLV team have taken a more traditional “hands on the ground approach” to investigating environmental impacts. The scientists have established 200 long-term research plots that encompass the entire northeastern Mojave Desert, spanning over 2 million hectares. At these locations, the researchers have gathered large data sets of vegetation and soil data that will help them understand the long-term recovery of habitat after severe disturbance such as fires, the installation of solar energy facilities or road building.

“Our work has provided insight into anticipated recovery of desert ecosystems after severe disturbance,” Abella says. “It will help inform restoration actions for temporary disturbances associated with renewable energy development.”

One way that solar installations can impact local ecosystems is by damaging the thin layer that tops the soil, termed biological crusts. These crusts stabilize the soils against erosion and provide essential nutrients to plants. Both the installation of solar farms and regular maintenance activities can disturb and remove this biological layer, which can take decades to recover.

Consequently, Dr. Henry Sun, a research microbiologist at the Desert Research Institute (DRI), and his team have investigated how to develop mitigation strategies to help prevent, or remediate any damage. To this end, the scientists have collected and saved the organisms in the soil crust and set about trying to understand how long those samples could survive and whether they could be successfully reintroduced to the desert environment.

In the lab, the scientists found that lichens can be stored dry at room temperature in ambient air for up to three years without any significant decline in vitality and that the ultraviolet rays did not negatively impact the lichens when they were reintroduced back into the desert. However, the researchers did find that crust lichens are primarily vulnerable to oxidation. In the field, Sun recommends that amending the soil with antioxidants could protect the newly restored “seed” organisms from oxidation and thereby help them grow faster. “The research suggests that crust restoration is feasible and should be considered by land managers and solar companies,” Sun says.

Peering Beneath The Surface

Sleuthing out solar facilities impacts on the ecosystem also involves looking beneath the top layer of the soil, according to NEXUS researcher Dr. Markus Berli of the DRI. Berli explains that arrays of solar panels in the Nevada desert don’t just block the Sun’s rays from reaching the ground; they also intercept rainwater. Berli and his team’s research found that when rain fell, instead of the raindrops falling on the soil in a uniform, or homogenous pattern, when solar panels are in place, the droplets land on the panels and the earth immediately below the panels remains dry. But once the rain has fallen, it runs down the panel slopes and drains into the ground in concentrated drip lines.

To find out how this variation of rainwater distribution might impact the soil moisture, the scientists carried out a series of simulation experiments. From these studies, the researchers found that, at the drip line, the area where the raindrops slide down the panel and fed into the soil, the infiltration could reach depths of 50 centimeters. When water infiltrates as deep as 50 centimeters it is unlikely that it will be lost back into the atmosphere through evaporation. Instead it accumulates and is stored in the soil. The research indicates that possible pathways exist to use solar arrays as a means for rainwater harvesting which is particularly important in an environment that is water limited, Berli says.

Ultimately, the main application for the research is in predicting the soil moisture pattern and therefore helping to assess the type of “ecosystem” that would evolve within the fence of a low-impact solar facility. The water redistribution could lead to a quite different “ecosystem” evolving after construction, as more moisture and shade would be available.

Conceptual model of water infiltration into soil under a solar array.
–Markus Berli

The mission of the NEXUS External Engagement team is to develop collaborations between NEXUS researchers and stakeholders from industries, agencies and the public with a view to further develop solar energy technology while minimizing water use and other impacts of solar plants on the environment. One achievement of the team was to facilitate discussions between NEXUS researchers, the US Fish and Wildlife Service and Valley Electric Association, Inc. (VEA) that resulted in an innovative approach designed to minimize the environmental footprint of VEA’s community solar project.

Several NEXUS researchers have also engaged in collaborations that have furthered their research objectives and allowed other institutes or companies to benefit from their findings. Dr. Dale Devitt of UNLV has written a successful grant funded by VEA, which designed and built the community solar facility that did not alter the surface hydrology and minimized plant removal. Working at the VEA site will present Devitt and his team the opportunity to compare and contrast the environmental impacts of the VEA site with those of a traditional solar facility in Eldorado Valley. Devitt’s team’s research has also allowed the scientists to develop a joint study with the University of Texas, in which they will be assessing environmental impact of large scale solar in west Texas.

UNLV’s Scott Abella has fostered collaborations with researchers from the University of California System and the United States Geological survey, enabling the team to publish a synthesis article in the journal Frontiers in Ecology and the Environment.

Abella has previously collaborated with the Bureau of Land Management (BLM)-Nevada to investigate ways of improving the forage quality for desert tortoises. That collaboration has since resumed and currently Abella’s team is measuring the long-term improvement of forage quality and how tortoises respond to these enhanced habitats on BLM land.

“The collaborations enabled by the NEXUS project have significantly increased Nevada’s capacity to do research on solar energy and its impacts on the environment,” says Dr. Gayle Dana, NEXUS Project Director. “In doing so they have furthered the major goal of the NSF EPSCoR program to increase research capacity in the state.”