Shining a Light on Solar 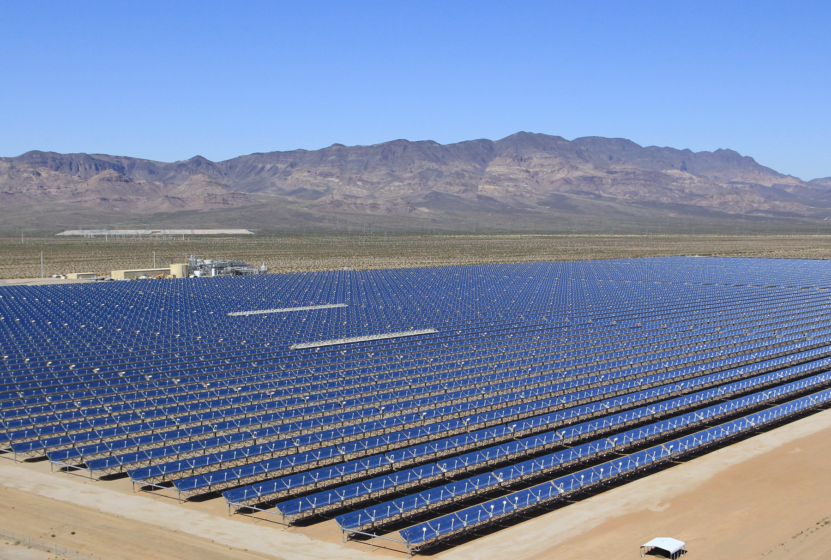 Solar energy proves an ideal energy source as harnessing the sun’s rays to produce electricity doesn’t produce greenhouse gases or pollutants. But no form of energy production is perfect and a key part of maximizing the benefits of this clean energy source lies in identifying its possible side effects.
“There exists a real need to better understand the environmental consequences of these utility scale solar facilities,” says NEXUS scientist Dale Devitt at the University of Nevada, Las Vegas (UNLV). “As it stands, documentation of the impacts of large-scale solar operations on the surrounding desert plant ecosystem is largely non-existent.”
To this end, Devitt and his UNLV graduate student, Lorenzo Apodaca, are investigating the impact of large-scale solar development on the surrounding climate and plants.
“In particular we are interested in how changes in the balance between incoming energy from the Sun and outgoing heat from the Earth might have shifted and how that might impact overall growth and productivity of the plants,” Devitt says.

To scout out the impacts of the solar facility on the local environment, the team based their investigations around the Copper Mountain 2 (CM2) solar facility in Eldorado Valley, Nevada where nearly 1.8 square kilometers of photovoltaic panels generate enough energy to power about 50,000 homes.
The scientists installed one 10-meter high meteorological tower just within the southern boundaries of the facility, a second tower 100 meters outside the facility on the north side, and a third tower, 2.3 kilometers north again. Each tower records the atmospheric conditions such as the temperature, relative humidity, wind speed, and radiation as well as soil conditions such as the soil moisture and soil temperature.
The scientists also installed a grid network of mini towers, which houses air temperature sensors located at heights of 10 centimeters, 1 meter, 2 meters and 3 meters above ground level.
“We are using a series of mini towers to monitor localized temperature changes in the adjacent natural habitat, as localized climate within the facility may be altering growing conditions in the nearby desert plant community,” Devitt says.

When the scientists analyzed the wind speed, which typically went from south to north over the panels (during the non-winter months), they found it was consistent over the south tower and the tower at 2.3 kilometers to the north. But over the north tower just outside of the facility, large and erratic differences occurred.
“So the large scale facility is causing this air turbulence at this lower elevation,” Devitt says. “And, of course, turbulence is the main driving force for moving water vapor off the leaves.” By removing water off the leaves the turbulence impacts the plant’s transpiration-the movement of water through the plant-creating water stress.
The scientists also found that 2.3 kilometers downslope from the facility the air temperature at two meters height was greater than that at one meter. As the one meter height reflects the canopy height of the creosote plants, this temperature difference reflects the fact that evapotranspiration cools the air directly above the plants. But, near the facility, the scientists saw the reverse effect: the air was actually warmer at one meter than at two meters.
The team believes that heat from the facility is being moved into the plant community by horizontal movement. Observing their results they noted that on one particular day and time, the temperature could be as much as 5 degrees Celsius warmer 100 meters away from the facility at one-meter height than it would be much further away.
“The point is that this spatial pattern shifts constantly: It shifts based on the time of day, it shifts based on wind direction and shifts based on the day of the year,” Devitt says. “So in the future we are going to have to try to get a handle on this, to see how the heat is moving and how it is impacting the plants.”

A second mission of the team’s project was to investigate the impacts of the CM2 facility on the surface hydrology, or the way that the water flows, in the surrounding environment.
“The placement of CM2 represents a major obstacle to established surface water flow,” Devitt says. Although there is only a gentle slope in the region surrounding the facility, it is still enough to create connected washes that transport water in a random way, Devitt says. “But when you have a large scale disturbance you basically truncate the surface hydrology and there is no longer this continual flow.”
To determine the possible water flow changes and the impact on the plant community the team installed access tubes into the ground to measure the changes in soil water in storage. They also assessed the health of the plants along ridges and washes over a 1000-meter gradient.
The scientists discovered that in the summer months, plants near the facility showed a decrease in water potential (internal plant water status) in comparison to those well away from the facility. In the winter months, when the environmental stresses were low, the differences between the plants’ water potential closer to and farther away from the facility disappeared.

“So it is this higher temperature and reduced volume of water being accumulated through the alteration of the surface hydrology that leads to stress on the plants near the facility,” Devitt says.
The changes in water potential also impact the plants’ chlorophyll status, an indicator of stress, closer to the facility. “We were seeing a shift in climatic conditions and a decoupling of surface hydrology, which means the plants closer to the large scale disturbance are under greater stress,” Devitt says.
To minimize the impact of solar development on desert ecosystems, facilities need to be developed that maintain surface washes that allow water to flow down slope to plant communities, Devitt says. “Our research is showing that these facilities do have an environmental footprint and this information can be used to guide design of solar facilities to help mitigate these impacts,” he says.

Understanding the environmental impacts of solar energy projects is one of the five core objectives of the NEXUS project. To this end, through field studies on the ground, NEXUS scientists are investigating the impacts of solar facilities and panels on microclimates, surface hydrology, and rainfall distribution and infiltration.  From the skies, via remote sensing, NEXUS scientists are determining whether the installation of solar facilities is changing the landscape cover and temperature of the local environment.  In the instances where the construction or operation of solar facilities has impacted the surrounding ecology, NEXUS researchers are working to assess and implement restoration treatments.  “Our NEXUS environmental research is creating science-based information that land-use agencies can use for designing effective ways to manage and mitigate environmental issues associated with large-scale solar plant development”, says Dr. Gayle Dana, NEXUS Project Director. “So we are instrumental in producing information that decision-makers can use in evaluating energy versus environmental tradeoffs for solar energy investments.”