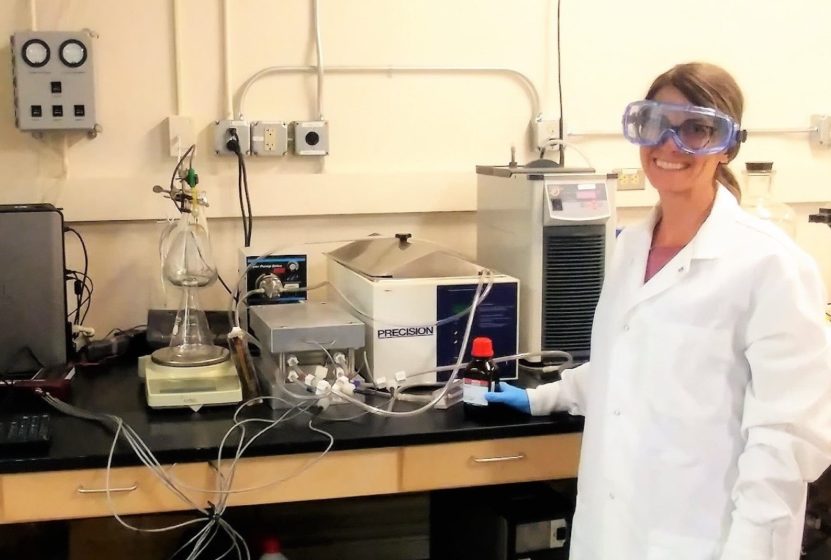 Solar power plants need water, but where the sun shines the most in the U.S., water can be a scarce resource. The water required for cooling, or to wash mirrors and panels, could be hard to come by in certain regions of Nevada and thereby pose problems for the long-term sustainability of solar power in the State.
For this reason, NEXUS scientists have investigated the use of impaired waters and other sources of water that ordinarily wouldn’t be used for potable purposes in solar energy production. But processing or “cleaning” such water requires energy. Consequently, NEXUS researchers have created an ingenious technology that supports both solar energy and water treatment: This technology uses solar energy to power water treatment and the treated water for cooling and cleaning.
“This technology has the potential to make solar energy a sustainable option in arid, remote locations by utilizing on-site resources, non-potable water and free heat, to meet the clean water needs of the facility,” says NEXUS researcher Dr. Sage Hiibel at the University of Nevada, Reno.

The NEXUS technology hinges on a process called direct contact membrane distillation (DCMD), an emerging water treatment technique that can be used to treat many non-potable waters. This technology removes the salt from water by using a semi-permeable membrane that lets only pure water vapor pass through, but not other chemicals or particles.
In a DCMD system, non-potable water passes along one side of the membrane that contains microscopic pores in its structure and also repels water.
Before, and while, the non-potable water is passed along one side of the membrane, solar energy heats it up causing pure water to evaporate. This water vapor is able to pass through the small pores of the hydrophobic membrane. Once it passes through to the other side of the membrane the vapor condenses to form clean, pure water. “DCMD has extremely high rejections of non-volatile contaminants such as salts and dust particles that we typically see at solar facilities and on solar panels,” Hiibel says.
Warm non-potable water continually circulates on one side of the membrane and cool clean water circulates on the other. The vapor pressure difference caused by the temperature difference on either side of the membrane drives the purification process. While DCMD does operate at low temperatures and pressures, requiring less energy than other water treatment processes such as reverse osmosis, it does rely on the temperature difference between the warm and the cool water. In the symbiotic technology designed by the researchers, solar energy and other heat supplies available on site supplies the heat meaning that the system can be ultimately sustainable.
“Because we only need to be in the 50-60 °C range, taking advantage of low-grade or waste heat to drive the DCMD process decreases the electrical power inputs tremendously,” Hiibel says.
The team has investigated the working of the system in the laboratory, testing optimal membrane materials, thickness, and pore size. The researchers have also developed a pilot-scale system that they will use to treat solar panel wash waters and other impaired waters at solar energy facilities.
“DCMD and solar are perfect partners – taking heat from the panels and using it to heat up the non-potable water not only gives DCMD ‘free’ thermal energy, but it also improves panel efficiency by providing purified water to clean the panels; it’s a win-win,” Hiibel says.

Taking It To The Road

Having tested the DCMD technology extensively in the lab, the scientists are now installing it in a mobile water treatment trailer, the Nevada Solar-Water Express. The trailer, which can be taken to solar facilities around the region, can treat and clean water onsite, thereby reducing the cost to pump and heat impaired waters. By treating water onsite, the team could potentially expect savings of up to 20 gal/MWh.
“Due to the remoteness of most large-scale solar facilities, bringing fresh clean water in and taking the dirty water out would be incredibly expensive,” Hiibel says. “On-site treatment will cut those transportation costs completely, which makes the economics much more favorable.”

The trailer also contains a variety of other water technologies that can be used to raise Science, Technology, Engineering and Mathematics (STEM) awareness for visiting students. The trailer has a six-foot awning window for demonstrations, fixed bench-space, a small wet-lab area, module areas for various treatment technologies, and photovoltaic panels on the roof to demonstrate solar energy systems.
“Our goal is to not only provide a sustainable supply of clean water for solar facilities, but also to raise awareness of what is possible in Nevada, build collaborations with other agencies and researchers, and help to educate the public and get them behind clean water and renewable energy here in Nevada,” Hiibel says.

Front of the trailer showing the generator that will be used to power the experiments
and also as a waste heat source for the membrane distillation system.
–P. Faught Photo

Solar panels getting ready for installation on top of the trailer, with the top rack for the
trailer also in the background. The panels will be used to power a portion
of the trailer and the rack will be used for storage and as an elevated
source water supply location for the trailer (to gravity feed in
to non-pressurized experimental modules in the trailer).
–P. Faught Photo

A key objective of the NEXUS mission is to develop sustainable approaches that support the water needs for solar energy development. Using non-potable water forms a cornerstone of this goal: NEXUS scientists are currently investigating how to use such water to effectively wash solar panels at a small solar energy facility in Las Vegas. This particular project works synergistically with the evaluation of membranes for wastewater treatment. The combined goal of both projects is to provide the needed water for solar energy production primarily from non-potable water and use solar energy to drive the reuse of water. “Any water savings we incur by using non-potable water sources to wash panels and mirrors or for cooling in the solar plant contribute to the sustainability of solar energy by decreasing its water footprint,” says NEXUS Co-Principal Investigator and water lead Jacimaria Batista, a professor in the department of civil and environmental engineering and construction at the University of Nevada Las Vegas.