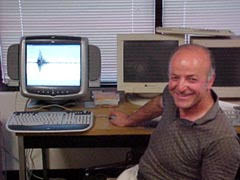 Great work often comes from humble beginnings. It’s easy to look around in our high tech world and forget that before the technology that makes our lives easier, someone had to figure out not only how to make it but how to make it work efficiently and effectively. Dr. Evangelos Yfantis, a computer science professor at University of Nevada, Las Vegas (UNLV), is currently in the research phase of developing just such a technology. Once his research is complete – part of the Solar-Energy-Water-Environment Nexus Project in Nevada – solar plant workers will have the ability to detect when solar panels need to be cleaned before the energy the panels are producing has significantly dropped. Though this may not seem revolutionary to some, it will have an impact on how solar energy is used, ideally leading to a broader use of the technology.
Dr. Yfantis is one of many researchers located throughout Nevada who are part of the NEXUS project. As a professor, Dr. Yfantis teaches computer science to undergraduate, masters and doctoral students at UNLV in the areas of computer graphics, digital image processing, cryptography, pattern recognition, artificial neural networks deep learning, and genetic algorithms. Dr. Yfantis also is an active researcher at UNLV which includes developing theories, publishing articles on his research, bringing research money to the university, and serving as a mentor to students as well as an industry expert. His most recent paper, “Using Spectral Decomposition to Detect Dirty Solar Panels and Minimize Impact on Energy Production” was published by the “Society for Science and Education United Kingdom” in the “Advances in Images in Video Processing” journal. This article focuses directly on his current work with the Solar Nexus Project. Dr. Yfantis has had nearly 30 articles and papers published over the last five years.
Dr. Yfantis did not stumble into his career haphazardly. “As far back as I can remember, I wanted to be a professor of hard science and engineering,” Dr. Yfantis said. “We love being part of the Solar Nexus Project and the opportunity to do meaningful work. The ultimate goal is that the research will establish standards of how to optimize solar power output and minimize the cost of maintenance of the solar panels.”
The Solar-Energy-Water-Environment Nexus Project in Nevada, also known as the Solar Nexus Project, is a five year research project funded by the National Science Foundation through Nevada EPSCoR which focuses on the connection between solar energy generation and Nevada’s limited water resources and the fragile environment. The focus of the Solar Nexus Project is creating a center of research excellence on solar energy conversion to electricity, minimizing its negative impacts on water usage and the environment.
Page Views: 450