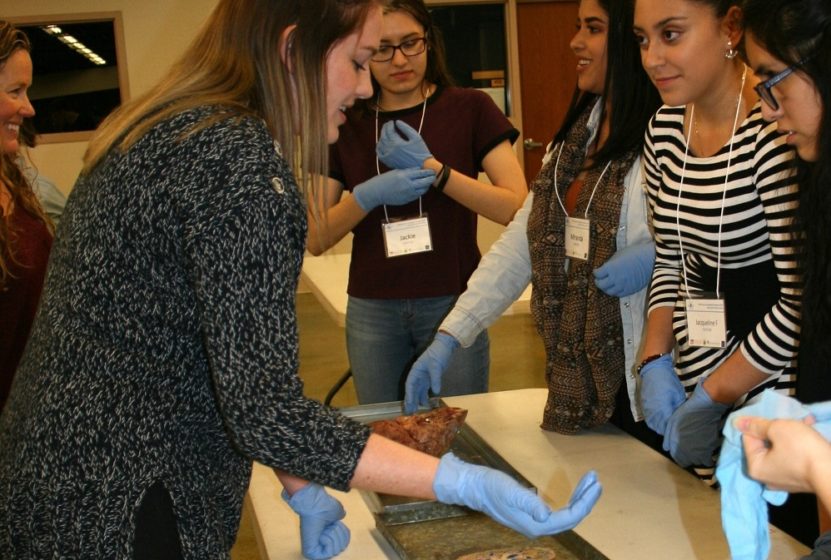 For many high schoolers, the word science conjures up images of lab coats and petri dishes, and sometimes boring calculations, but a program run by NEXUS educators is aiming to show that the world of STEM is broader, deeper and even more exciting, than they could possibly imagine.

The STEM Career Investigation Program (SCIP), which has been supported by NEXUS for four years, engages high school sophomores, juniors, and seniors in Northern Nevada for six evenings in interactive lectures and workshops given by scientists and engineers from a wide array of specialties.

“The intention of SCIP is to touch students, preferably in their earlier years of high school, and to help them understand the breadth of possibilities that there are in STEM fields,” says Dr. Jacque Ewing-Taylor of the University of Nevada Reno, the education workforce component lead for the Nexus project.

On any week of the six-week program students might be listening to an engineer from the Tesla Gigafactory, a forensic scientist for the Washoe County Sheriff’s Office, or a university biologist. And each evening session is not just a lecture but involves hands on experience for the students. When NEXUS scientist Dr. Scott Mensing, a biogeographer and paleoecologist at UNR presents he constructs a treasure hunt where the students seek, find and analyze different types of pollen. All of the speakers, as well as presenting their current research projects to the students, discuss future job possibilities for someone with their degree and area of specialization.

“What we find is that students have a very general idea about STEM topics, in particular, science. And they think, “I want to be a doctor, or I want to be a nurse, or I want to be an engineer” but they have very little information about the specifics of those careers,” Ewing-Taylor says.

The SCIP program aims to address that information gap early in students’ academic careers. Doing so could change the landscape of people entering the STEM fields, Ewing-Taylor believes. “We’ve known since the late nineties that we were falling behind in the production of scientists and engineers in our workforce,” Ewing-Taylor says. “Students were not coming to our universities or interested in STEM fields.”

To address this deficit educators have emphasized promoting STEM fields at universities and helping them get through STEM classes. But the K-12 years have not been targeted as much and the pipeline needs to start earlier, Ewing-Taylor says. “Educational research has shown that if children are not interested in science by fifth grade, it’s extremely difficult once they get past that age to get them into the science classes, and the math classes that they need to then be successful in college,” Ewing-Taylor says.

Consequently the SCIP program aims to catch children who are still quite young and inspire an early interest in STEM fields. In particular, it targets involving children that weren’t necessary predisposed to STEM to begin with. Then one of the key missions of the program is to show children the breadth of careers that are possible with STEM training.

Ultimately, the program tries to achieve these goals by inspiring the students with respect to how exciting a career in STEM can be. When Brittney Ann Clinton, a forensics specialist from the Washoe County Sheriff’s Office Crime Lab presented she set up a Crime Scene Investigation scenario for the students. “The kids just ate it up,” Ewing-Taylor says.

When Jennifer Hollander, who co-runs the anatomy lab at UNR, presented she arrived with her a dissection team and various body parts. Five and six-year-old girls got to inspect the dissected brains and spinal columns. “Kids were saying, ‘Oh, I didn’t know anything about this, I’m really interested in this now,'” Ewing-Taylor says.

The program aims to emphasize that STEM fields are equally available to students of either sex or whatever their nationality. “Another big goal is to get them, especially the girls, to see scientists that look like them,” Ewing-Taylor says.

The evenings are typically filled with lots of energy, excited voices and interested questions.  Ewing-Taylor hopes that these positive experiences not only instill inspiration in the students about STEM fields but also open their eyes to the possibilities available with STEM training. “When they actually get to talk to a research scientist, and they get to do something that that scientist does on a fairly regular basis, it really tends to open their eyes, and their minds,” Ewing-Taylor says. “Then they start think a little bit differently about the opportunities: What they could do. What they could be.”

SCIP students engineer a spaghetti structure to see who could build the tallest one that would stand on its own. –J. Ewing-Taylor Photo

Feedback from the SCIP Program Students

Following the six-week STEM Career Investigation Program (SCIP), each attending student fills in a survey whereby they comment on the individual lectures and workshops.

The following selected responses, regarding the presentation by Jens Peter Clausen from the TESLA Gigafactory, demonstrate what the students have gained from the experience:

“As a high school student, I am clambering to determine my future and how to make my decision valuable. This provided information to help guide me in making these decisions as well as understanding them.”

“It made me realize that, if I want to work for a company like Tesla, I’ll have to participate in more hands-on activities and think creatively.”

“It allowed me to realize/inform myself about the major challenges and goals of the STEM field.”

“I got to apply relevant concepts to the STEM I am learning in school and it was also a fun experience!”